Fighting Fake News with Real, 9/8/19; NRA has already warned Trump who has no appetite for gun control; A President who came slowly and pissed off quickly; 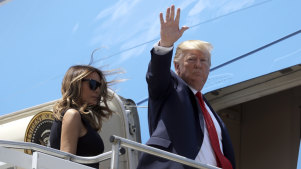 President Donald Trump says that he is open to calling on Congress to return from recess to strengthen background checks for gun buyers but that he sees "no political appetite" for banning assault rifles.
Trump's comments came as he left the White House for visits to Dayton, Ohio, and El Paso, Texas, on Wednesday on a trip that risks stoking divisions rather than bringing the country together after a pair of mass shootings over the weekend.

"sees" is not the appropriate term. Trump has no "appetite" for doing the "right" or moral thing. As a result, he was not welcome in either of the two cities bullshitting they loved him, and he alone had a "uniting " influence.  Trump, like Kim Jong-Un, was seen to suddenly backpedal and declare that he's the real victim of what occurred being called a racist. The truth he is a racist fully a contagious carrier of the White Supremacist virus that plagues America and is increasingly infecting more and more people inspired and enabled by the great enabler Trump. Who in 2019  helped increase mass shootings by 277% compared with the full year of 2018. More than 75% committed White National Supremacists wh Trump declared were "good" people and that violence was equivalent to the extremes of both political sides.
When the facts revealed, the opposite Trump did what he usually does backpedal for such a short time it was just performance art for the cameras and was back in top divisive and Racist mode at his rallies. (ODT) 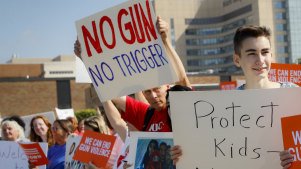 The victims, when asked if they'd like to meet the President all said No!! So Trump began talking about the crowds he drew to his rally the last time he was in El Paso. Seemingly aware that there were bigger crowds on the street outside telling him he wasn't welcome. He didn't stay long, and the press wasn't welcome. (ODT)