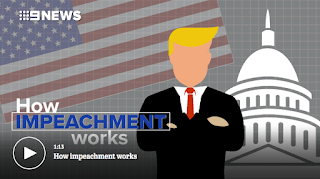 A second whistleblower has spoken to the intelligence community's internal watchdog about US President Donald Trump's dealings with Ukraine.
Mark Zaid, an attorney who represents both whistleblowers, on Sunday said that the second whistleblower, who also works in intelligence, had not yet filed a complaint with the inspector-general but had "first-hand knowledge" that supported the original complaint.

The first whistleblower, a CIA officer, filed a formal complaint with the inspector-general on August 12 that triggered the impeachment inquiry being led by House Democrats. The complaint alleged Trump was "using the power of his office to solicit interference from a foreign country" in the 2020 election.
The disclosure of a second whistleblower threatens to undermine arguments made by Trump and his allies against the first whistleblower: that the complaint was improperly filed because it was based on second-hand or third-hand information.

"This President needs to be impeached, just based on what he himself has said," Walsh said. "And Republicans better get behind that."

Flutter and Stars Group $18 billion tie-up will create the world's largest online gambling company.
Last week, Sportsbet's Irish parent Flutter and BetEasy's Canadian owner Stars Group agreed to merge in a £9.8 billion ($18 billion) tie-up. If approved, it will create the world's largest online gambling company – one that could pose a formidable threat to the dominant local player, ASX-listed Tabcorp
Given Murdoch owns the biggest Media Corporation in the English speaking world will it's coverage of sport simply become an In-House Insider trading company influencing more widely where the money should flow into their pockets? The Murdoch sports writers will simply be influencers for the flow of money for the Murdochs as easily as they money from politics today. They might as well have taken over the ASX. This is NO PUNT, but it's the end of ethical PUNTING! (ODT)

ANDREW HASTIE WARNS US AGAIN. WILL WE NOW LISTEN?


Andrew Hastie won’t be shut up. And after China’s outrageous threats over the past week, maybe the Morrison Government should stop trying.
Hastie, the Liberal MP and former SAS captain, has now written a powerful foreword to a book warning that war between the United States and China is ominously likely, if not yet inevitable.
Destined for War: Can America and China escape Thucydides’ Trap?, republished by Scribe next week, is by eminent Harvard scholar Graham Allison, who says that in the past 500 years we’ve 16 times seen what we see now — an established superpower challenged by a rising new one. In 12 of those 16 times, war broke out.
Hastie, now chairman of parliament’s intelligence and security committee, says Australians will “get little comfort” from this.
Nor does he want us to.
Hastie and Molan are warmongers both believe wars are man-made inevitable and necessary for peace and that climate change isn't man-made and can be ignored because it too is unavoidable and will be a progenitor for wars to come. So the planet doesn't doesn't need to unite but rather needs to prepare for their inevitable wars to come. We need to prepare the earlier, the better and they believe in a strike force. Molan in the Middle East and Hastie with China. Neither sees war since WW2 has become a business and now a man-made necessity born for profit rather than danger and particularly by one side.
Both these men are not only blind but have tarnished past records aggressors, and both have been accused of being war criminals serving under John Howard. Both part of Australian forces whose history has hardly been heroic. Molan is known as The Butcher of Fallujah and Hastie a part of the SAS currently being questioned for war crimes in Afghanistan. War is a problem when ex-soldiers become politicians who want to justify their past actions.
What's not mentioned by Andrew Bolt that over the 500 years wars change and each is different. Who began the wars why and were they really so inevitable as he seems to think. They need context and historical examination to be understood. Furthermore, would Andrew Bolt offer his sons up for war to yet another unnecessary war?
In recent years Conservatives have taken Australians to fight in Vietnam, Afghanistan, Iraq Syria and are currently on the borders threatening Iran. All conflicts declared necessary by the likes of Hasties, Molan's and supported by media with the mindset of Andrew Bolt and all wars that have been started and lost shamefully by us.
Bolt seems to think war is some sort of noble and inevitable fantasy act because he can point to 12 of 16 started over 500 years. Well, I just looked to the 4-5 in which Australia has started, participated in, and lost. He doesn't point out the number of times the ALP has taken us out of wars or the number of times they could have been avoided. Neither Molan or Hastie fought in necessary wars. In fact, they fought in unnecessary ones. Molan fought under John Howard, and both have been branded, international war criminals. Both in helped start conflicts that have escalated out of control where once allies became our enemies mainly due to western betrayal and interference. Hussein in Iraq was a western ally as was were the Mujahadeen in Afghanistan out of which grew today's Taliban. In other words, they were both professional soldiers who blindly followed orders, and neither were shining heroes  Nor does Bolt mention that all these wars were at the behest of the USA all a result of a blinkered view and all started by them.
Bolt's inevitable war is a war that will be started with a mindset like his whose the most likely to start a war China with one military base outside its border in the Pacific or the USA with 800 and Australia 4-5? The nation whose economy is dependant on the use of weapons it sells or the nation whose economy is dependant on trade and helping the third world to grow rather than arm it?
Posted by Old Dog Thoughts at 16:15