How have aged care homes become the epicentre of the crisis? How do we fix this?

Who funds and runs aged care facilities? How have they become the epicentre of this crisis? And how do we fix this?

Significant in this report is the lack of data, no figures are given as to the care-homes with the best and worst records. The State-run homes have had far less than 10% of the total number of deaths and far less spread rate than the Private and Commonwealth regulated homes. Yet Dan Andrews is getting the blame and Morrison was happy to allow it to happen adding fuel to the fire on Tuesday.

Andrews has to date "helped ", out of necessity, the Commonwealth, and since this has come to light Morrison has back peddled and begun trying to pull his finger out. In the meantime, Dan Andrews has been getting an undeserved shellacking from the conservative MSM the PR division of the LNP. Today the best review Dan has had has been "Both Governments have made mistakes" which when analysed by the weight of those mistakes is utter bullshit.

This 2nd wave's primary cause has been LNP Federal Government doing nothing since April despite Dan Andrew's warnings. Over 20% of cases coming from Commonwealth regulated aged-care facilities which Morrison demanded be open to visitors and cross-fertilising staff on no pandemic pay should they be forced to quarantine.  Staff so lowly paid they had to work. The majority of deaths have occurred in these facilities which were from the getgo understaffed and underequipped to cope.

The State LNP opposition leader O'Brien has the intelligence of less than a brick in the circumstance and is playing politics and being given air for being an absolute ignorant idiot calling Andrew to " ask the Commonwealth for help" when Andrews has been bailing them out and they have been asking for his which has been forthcoming.  He's shut down elective surgery for the LNP's incompetence. However, read News Corp or Ch9 and what you get is a sense at best that mistakes "have been made on both sides"  at worst it's the Victorian ALP government that's to blame. MSM PR and doing it in a pandemic is surely criminal. I notice Andrew Bolt changed his banner of blame today without saying sorry. Did he get legal guidance from above?

Surly media bear some responsibility for irresponsible and publicly reckless criminal and false opinion being sold as information and news of which we have been victims of. Afterall Peter Foster was jailed for selling tea deemed a fake product why can Murdoch and his paid monkeys be allowed to do far worse and get a freebie thanks of $10 mill from Morrison's LNP while our ABC gets a "no-cut" reduction in their budget year in year out since 2013? (ODT)

Never let it be said that the orthodoxy in the State of Israel has no power. This case has been going on for 12 years (ODT)

Judge Yitzhak Amit told the defence that the number of appeals was unprecedented even among the most high-profile murder trials. Wednesday marked the case's 70th hearing.

"Some of the things that happened with this case have never taken place in the history of the establishment of the state of Israel," he said.

In 2016, an Israeli judge found Ms Leifer mentally unfit to face extradition to Australia and she was set free. But she was arrested in February 2018 after a private investigation revealed that she was leading a "normal life" and going about normal daily activities in the ultra-Orthodox settlement of Emmanuel.

While new COVID-19 cases in Sweden have been decreasing from the peak at the beginning of July, they still sit at about 250 per day. Denmark and Norway have been below that level since mid-April.

Swedes have paid a heavy price to get to where they are — and they’re still quite some way from controlling the spread of COVID-19, as their neighbours have done.

We don’t have to lose the lives that Sweden has to learn from its experience. Loose restrictions make COVID-19 harder to control. When the virus is out of control it spreads rapidly, putting millions of vulnerable people at greater risk and reducing the economic activity of the population.

By Melanie Davern, Mary-Louise McLaws and Ori Gudes about 4 hours ago

As cases soar in Melbourne, large clusters of COVID-19 cases have been identified across the northern and western suburbs, raising questions about occupation types and socio-economic differences across the city.

Andrews too eager to shift blame on aged care

After weeks of dealing with a disaster of his own making, Daniel Andrews has shifted the blame for the crisis in aged care to Canberra but not everyone in the federal government is pleased with Victoria’s role in trying to stem the horrific outbreak.

The polluting of reality under the title of an "analysis" is the Herald Sun's toxic interpretation of facts for the sole purpose of misdirection on Morrison's behalf. Dan Andrews hasn't shifted anything. The Federal Government is to blame for the horrific outbreak of death that has occurred in the sector of Federal responsibility in Victoria. The LNP has remained silent allowing Murdoch media to misdirect what has occurred and who is really responsible.

Since April Dan Andrews asked the ACT to regulate the visiting rules and casual work structure in the underregulated private aged-care homes under Morrison's supervision. They did nothing about it until 10 days ago after over 90% of the deaths that have occurred have done so in the Federal controlled homes. Andrews publicly called them out two days ago amplifying the conditions found only to have Greg Hunt cry crocodile tears denying the state and staffing under his jurisdiction. Now Murdoch media is playing word games and claiming them to be an analysis "Andrews has shifted the blame to Canberra" as if "the blame" was his. Of course, not everyone is pleased in Canberra the light of truth is being shone on them and Andrews has no intention to be their sacrificial lamb. His problem, however, is News Corp is the principle PR firm for the LNP and just been paid $10mill for their service

Andrews has stepped into the breach to save lives and had to delay "elective surgery" to take over private hospital beds. How dare he do that and interfere with  Canberra's Private System. Morrison in Qld publicly declared he had to go to Victoria to fix up the "Victorian Mess" along with Murdoch media both were blowing political smoke of fake news over the landscape of reality Latest Operating theatres across Melbourne have been closed to all but the most urgent surgery cases to free up beds for the growing number of aged-care residents with coronavirus, and Premier Daniel Andrews is warning there will be major impacts on Victorians needing operations.
7 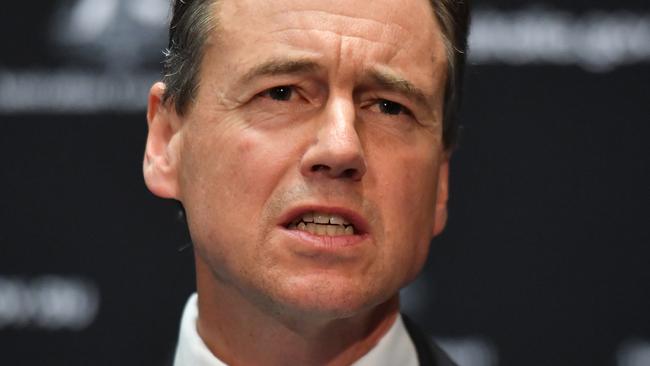 Hunt: ‘Real progress’ being made in aged care outbreaks

COLUMN Tuesday’s Black Lives Matter protest in Sydney was stopped by police before it started, yet still worked its poison. The tension about whether it would go ahead gave its organisers a big media platform to make David Dungay "a symbol of the Australian Black Lives Matter movement” after he was killed for "eating biscuits". Now for the facts...
1h ago

Don't let this snake oil salesman con you into subscribing to the shrinking Herald Sun. The fact is David Dungay died in a prison cell while being accosted by 4-5 long bay guards for "eating biscuits". In Bolt's book, the guards were the unwitting victims of Dungay's death. As have been the authorities involved with the 450 other deaths in custody.(ODT)

COLUMN This won’t please many people. But we should thank our political leaders — even Victorian Premier Daniel Andrews — for how they’re fighting like hell to stop this virus.
1h ago

THE FEDERAL GOVERNMENT IS TO BLAME


"There’s 769 aged residents infected in Aged Care facilities, but only 5 in public-run facilities. Private Aged Care is the responsibility of Greg Hunt, Bio Security is the Federal Government’s responsibility (regardless of what the paid trolls and Sky News lackeys say)"

"On Tuesday Morrison said Daniel Andrews needed his help: WRONG. It was Morrison who asked Andrews for assistance." The Bulletin

There has been one major mistake made yes, and that's  Bolt's "analysis" of what's been happening. However, this banner is the closest you will get to Bolt saying he was wrong. The facts have been reported that Morrison, not Dan Andrews was responsible for the "Victorian Disaster". Andrews acted when he realised Morisson wasn't going to, and Morrison did nothing it seems because he had the backing of Murdoch and the other conservative MSM acting as PR agencies on his behalf. All pointing to Victoria and the ALP.

Like Trump and the China virus, the media insisted calling this the "Victorian Deaths" and not just because of their location but rather to get Dan. Even Morrison said he had to miss a meeting in Qld because he needed to race South and deal with the "Victorian Problem".

All of these "newsmen" avoided the fact that 90% of the deaths in aged-care homes were under Scott Morrison's and the Federal watch and they had done nothing to deal with the issue since April when it was clear what was happening. Morrison even demanded an open door visitor's policy, no paid pandemic leave, and a casualised mobile workforce all against Dan Andrews and Victoria's Public Health advice.

When Andrews grabbed media attention and said he wouldn't send his mother to any of Morrison's homes Greg Hunt the Minister cried crocodile tears saying they were excellent facilities operating under the world's best practice rules but with the world's worst results.

Here is Bolt doing Trump's Charlottesville jig declaring Morrison's neglect wasn't so bad as there were "mistakes" on both sides. No such feathered punch in the case of Indigenous deaths in custody as far as Bolt is concerned like Stolen Children there were none just look a the death certificates and the police and prison guards unfairly blamed.(ODT)