Fighting Fake News with REAL 22/9/22; Dan's made a tragic error; Murdoch media caught in the wholesale fabrication of anti-Harry bullshit; Real History of the Australia's Monarchy; Murdoch propaganda on show;

What on earth was Dan Andrews thinking? Was he expecting a great silence in 2022 when he's jumped the gutter and to kick an own goal? He's given the the right-wing fuel to protest the voice to parliament and he's feeding it.

"On the weekend I was speechless when I learnt of plans to rename Maroondah Hospital after Queen Elizabeth II."

Fake News straight from Murdoch's News Corp. Note how the other "civvies" aren't saluting either why? 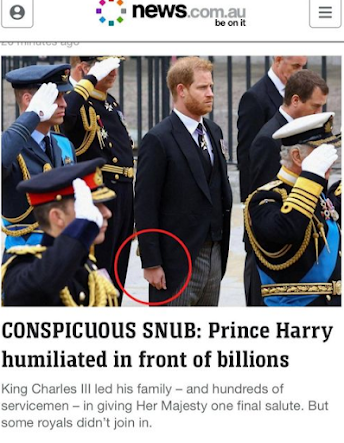 20h  ·
More Fake News from NewsCorp (NewsCorp and The National Times)
NewsCorp is angry because those in civvies are not saluting, which is why Harry is not saluting.
Nevertheless, NewCorp has shamelessly posted this blatant lie.
Not only do civilians not salute, only military personnel who are wearing headgear salute, them's the actual rules.
In an army office, a door guard (hat) might salute an officer in uniform (no hat) who works there, but the officer won't return it.
But it is apparent NewsCorp were absolutely desperate with this “story”.
According English military tradition and protocol, persons in civilian attire do not EVER salute!!! (Unlike the US).
There is no story here. NewsCorp's lack of basic research and desperation to go after Harry is utterly nauseating.
WTF is this Murdoch campaign about?
Its becoming very apparent the Murdoch empire has discovered that outside of America it's power and influence is fading, so they resort to ridiculous hyperbole in a pathetic attempt to be noticed and talked about again.
Their day is passing, and good riddance.

India, since Independence, has risen in the ranks of world nations to become one of the most advanced economically and technologically. Leaps ahead of these two racists. The British East India Company took the subcontinent from being the world's biggest economy most fertile and the world's biggest exporter to a shadow of itself and they kept it there for years exploiting it's wealth until they themselves went bankrupt.
Here we have Bevis and Butthead at Murdoch's Sky News rearranging history for no particular reason to tell an insignificant audience of less than 20,000 Australia wide that India would be better off under the protection of the Monarchy again, why? Rowan Dean the unmade bed is striving to be Tucker Carlson down under and James Morrow well he's simply a media has been. Whose Bevis and whose Butthead it's a compliment because neither are as funny I'm afraid.

Never!! He's simply a lazy journalist if he's one at all. A talking head who selects and interprets facts to support his conclusion and ignore those that don't but scream he's wrong. That simply leaves him standing naked and an shitfaced idiot.
Even if he did apologize he'd still would neither be a journalist nor an opinionator of any merit as he has worked blinkered for Murdoch these past 40+ years moulded to become like the human gas bags once seen outside used car yards to draw attention.
It's been apparent that Bolt is on his way out as well dropped from 2GB he's simply making noise to be noticed not like the gory days when he was Tony's media BFF and telling us all about it.

Prince Charles, now King Charles 111 and King of Australia wrote to Kerr after the dismissal, ‘what you did last year was right and the courageous thing to do’

A gaggle of Royals all collaborated with Kerr in the dismissal of the Whitlam Government-The Queen,Prince Philip,Prince Charles and Earl Mountbatten of Dieppe fame.

1h  ·
Peter Gleeson a well know Liberal Party supporter writes for NewsCorp supporting Matthew Guy - are we surprised. (Sleeping Giants and The National Times)
Peter Gleeson is another biased Rupert Murdoch employee, Sky News commentator and News Corp commentator openly boosting for the Liberal Party in the Herald Sun.
It's another instance of NewsCorp telling Australians who to vote for.
How do we know Matthew Guy wont be a good leader once in office? we don't , but we do know if his performance as Victorian Opposition Leader is to be judged then the answer is - Pathetic.
Many Victorian's have long memories and remember Matthew Guy’s time as Planning Minister between 2010-2014. It was just pro developer and nobody else got a look in.
How do we know Guy wont be a good leader?...well he had that infamous lobster meal with an alleged Mafia mobster - what was all that about and measure of knowledge of history he quoted King Arthur, a mythical figure, as a ancestor of the now deceased Queen Elizabeth displaying his complete lack of education.
The next question to be asked is why would anyone Vote for man who point blank refuses to be open to discussion or criticism. He blocks anyone on Twitter who has the hide to who question him!
Such is his glass jaw.
If this is what this Matthew Guy stands for then he’s just gonna be another Scott Morrison! I
Hopefully the Victorians won't fall for the NewsCorp bias.
When Victoria electors vote they will look at what the state government is achieving.
Then look at abysmal performance of the former Liberal Governments such as the one led by Jeff Kennett and the former Morrison government with all it's cronyism, rorts, corruption and out right lies which were told on a daily basis.
So any propaganda published by the rightwing Murdoch Media should be treated with the contempt it deserves.
Posted by Old Dog Thoughts at 07:07